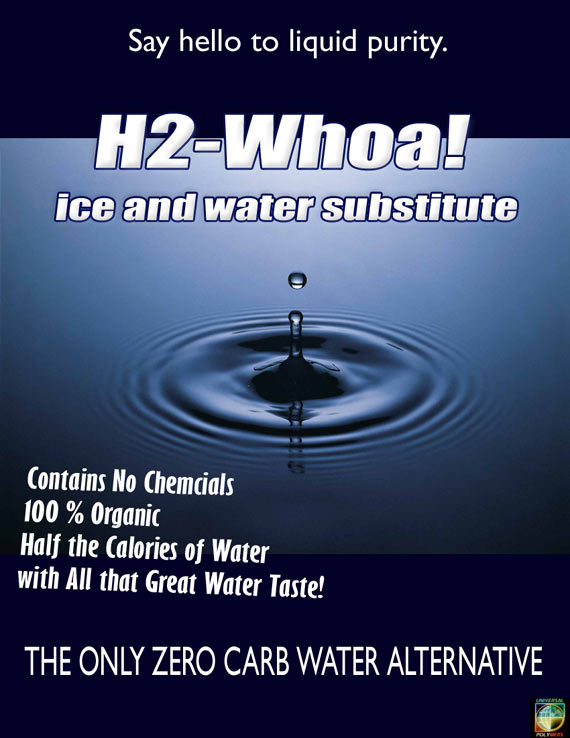 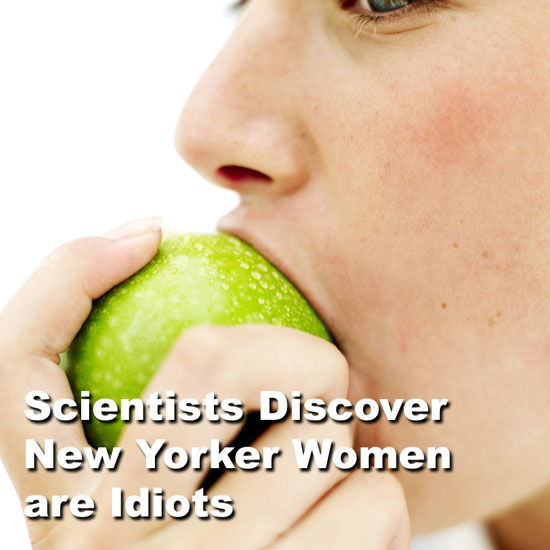 New York, NY– The Institute for Freaking Out New York Women has released its 2008 report, forcing over 3 million vaguely informed and neurotically worrisome female New Yorkers to adjust their purchasing habits. Coupled with recent studies proving once and for all that astrology is utter nonsense, dames of the Big Apple sure are in a tizzy.

In a shocking revelation, the report reveals that shimmery lipstick contains fish scales, chewing gum is made with milk protein and that lotion is filled with ground up titanium dioxide.

“There are chemicals in everything. It’s all chemicals,” stated thirty year old Bethany Page of Park Slope, Brooklyn.

New York Women were recently left wondering what to do when confronted with the explosive fact that organic foods contained carbon. Ms. Page was particularly violent when told this while consuming an organic, gluten-free, smoothie, after which she shoved the container away, yelling “Evil!”

Even clothing didn’t pass safely through the IPNYW’s report this year. So-called fair trade items, New York women were told, are still made by poor people who would love to drink Pepsi and worry about whether they’re too fat. Some of those workers use their fair trade earnings to buy meat.

The problem was compounded further when the IPNYW’s semi-annual bar study found that over 90% of mixed drinks at bars, including the vaunted cosmopolitan, mojito, and Alabama slammer, were not made with “eco-friendly” ingredients. A statistically insignificant fraction less than 100% of bar limes were grown using pesticides in order to provide a nice shine and juicy interior.

While not as shocking as last year’s IPNYW report, which announced that gummy bears contain corn syrup and are made out of crushed sheep bones, many New York women have vowed to try and purchase more over-priced “organic” and “natural” products. At least until next year, when the IPNYW helps them learn that “natural” products contain ground up spiders and that “organic” vegetables are grown in cow shit. 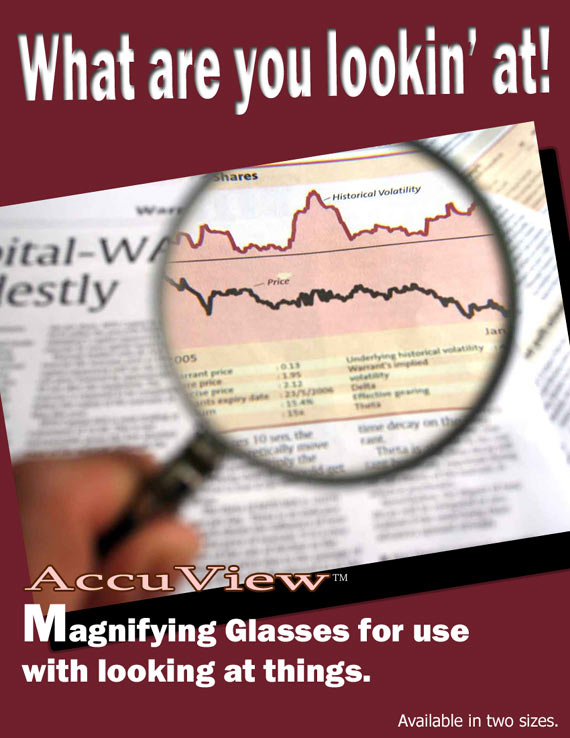 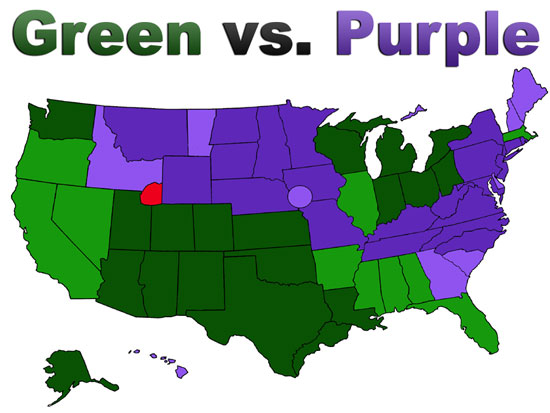 When the Free-American party was founded in the wake of the Crisis of 1883 and the 1884 interference by U.S. Marines in Cosa Nostra on the orders of President Horace B. Borden, it attracted many disaffected Union Labor Party and Federal Party supporters. This motley group, who could no longer stand shoulder-to-shoulder in the face of such graft and colonial enterprise, helped to offset the Republican Party off-shoot engendered by the American Freedom Party.

In 1888 the Free-American and American Freedom parties went head-to-head in a presidential election for the first time. While neither party won (Republican tailor’s dummy Benjamin Harrison took the prize), the nation split noticeably along each party’s political lines.

The wake of division flowed throughout the campaign, eventually splitting the nation along the route of the Montsylvania-Pacific Railway which had precipitated the Crisis of 1883 to begin with. Snaking its way from Southwest to Northeast, the railway separated regions politically as well as physically, creating what Teddy Roosevelt christened in 1904 as “The Great Diagonal Divide.” The Divide has had major bearing on every U.S. presidential election and national issue for the past 120 years.

The Free-American Party (The Greens), as the new children in the sub-division, planned to exploit every regional factor they could in an attempt to gain a huge electoral bloc. From the project representing the inchoate plans for what would become the Hoover Dam, through the speculative land crisis that would last decades and leave fallow the region which eventually formed Platha, into the Ohio Religious Persecutions, and all the way to immigration problems in the industrial and urban New England, the Free American Party stabbed at everything.

The American Freedom Party (The Purples), by contrast, was never able to gain the initiative in this first contest of wills. Fumbling the key issue of the St. Lawrence Seaway Blockade, they never recovered. Cut off at the knees for their support of Ku Klux Klan in Kentucky leader Arthur Phillips-Smoot, and having no appropriate response to the Great Blizzard of 1888, the American Freedom Party would barely have made it to election day if not for their vociferous embrace of Ernest Thayer’s poem “Casey at the Bat” as their convention keynote.

While neither party would make headway in presidential politics until the election of 1898, the Free-American Party and the American Freedom Party have essentially each taken turns in the leadership role and for the most part the geographic blocs created through their competition have remained static. And so every four years it becomes another battle of Green versus Purple, with the winner taking the White House.

Green and Purple, always diametrically opposed, continue to battle to this day. In 2008, the nation will see who will triumph; Dick Armstrong, who proudly wears the Green sash and golden starburst, or the eventual Purple-sashed contender. It is an exercise as old as 120 years and as fresh each time as the newborn calves of the field. And it is our choice, our vote, our will which decides if this year Green or Purple shall triumph. 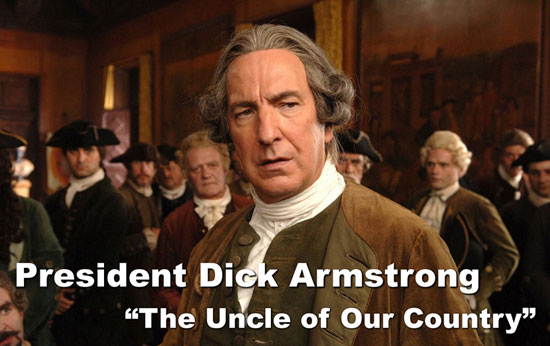 Never one to shy away from controversy or to worry about the polls, President Dick Armstrong has been steadfastly ignoring the upcoming election and the frenzied campaigning of his would-be opponents. Instead, Armstrong has focused on running the nation, playing daily games of marco polo with his five sons and three daughters, and fruitlessly hunting the White House lawn moles with a frogging gig. Some insiders, however, think he’s not quite ready for next November and the fight to the finish.

“We must not forget,” said amateur blogging pundit Lucy Coverage of Firedoglake.com “that Armstrong’s first term was anything but a breeze. Between the War, the Reptile Crisis, the short-lived video camera revolt, the Nullification Confrontation and the situation in Belgium, Armstrong’s had his hands full. Still, he has handled every situation with his usual wit and aplomb. Also, get a load of those suits!”

When asked about the election, Armstrong has developed an interesting new habit. Instead of answering he will smile coyly and then perform several yo-yo tricks. His most common is the “walk the dog,” though he has been known, on occasion, to do the “around the world,” or the highly difficult “Chinese loop the loop.”

Insiders have leaked reports that the president’s scale models have become “sloppy and careless,” troubling since Armstrong is well known for his breathtakingly detailed 1:48 scale replicas of his favorite airplane: the A-10 Warthog.

“It was troubling, because the cockpit glass was all fogged up and the landing gear wouldn’t retract because of a careless glue application. Half the decals were ripped or placed crooked,” stated White House Model Describer Mary Hargrove. “He even sanded the rudders in a sloppy fashion. Can you believe that?”

While the President is no doubt preoccupied by the upcoming election and the ongoing needle shortage, he seems upbeat as evidenced by a recent Daughters of the Agricultural Conflagration luncheon where the President displayed his charismatic wit and humor by recounting his third favorite joke:

In a tiny village on the Irish coast lived an old lady, a virgin and very proud of it. Sensing that her final days were rapidly approaching, and desiring to make sure everything was in proper order when she dies, she went to the town’s undertaker (who also happened to be the local postal clerk) to make the proper “final” arrangements. As a last wish, she informed the undertaker that she wanted the following inscription engraved on her tombstone: “BORN A VIRGIN, LIVED AS A VIRGIN, DIED A VIRGIN.” Not long after, the old maid died peacefully. A few days after the funeral, as the undertaker/postal clerk went to prepare the tombstone that the lady had requested, it became quite apparent that the tombstone that she had selected was much too small for the wording that she had chosen. He thought long and hard about how he could fulfill the old maid’s final request, considering the very limited space available on the small piece of stone. For days, he agonized over the dilemma. But finally his experience as a postal worker allowed him to come up with what he thought was the appropriate solution to the problem. The virgin’s tombstone was finally completed and duly engraved, and it read as follows: “RETURNED UNOPENED”

Despite the best efforts of the FA challengers, Armstrong seems more-or-less ready for the election and for another term. Polling asking whether Armstrong was preferred over any generic Free America candidate found the President ahead by a 5-to-1 margin. Against specific candidates, he led by as much as 90 points. As several taxidermists shouted at a recent speech, it seems that both Armstrong and the nation are ready for “Two hundred and eight more weeks.”