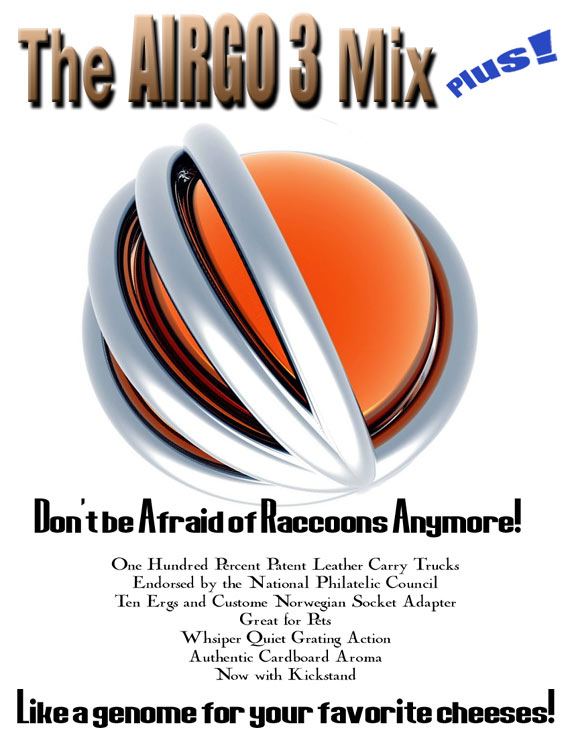 Aliens routinely come to Earth and abduct people for use in a bizarre intergalactic breeding program.

Cars can go up to 1,000 miles on a single gallon of gasoline, but this is covered up by oil companies and car manufacturers to increase their profits.

Daniel Bester Inc. is actually a front for the human allies of a dangerous alien empire that is attempting to take control of the Earth.

Energy from the human orgasm (orgone) is the most powerful thing in the universe; using it has allowed people to do everything from curing cancer to levitating the Pentagon.

Flying Saucers have been reverse-engineered by the Nazis, the Soviets and the USAF to develop advanced airplane technology.

Groom Lake, otherwise known as Area 51, is home to the corpses of several dead aliens whose ship crashed in New Mexico in 1947.

HAARP, the High-Frequency Active Auroral Research Program is a vast, powerful weather and/or mind control device created by the US Government.

Intelligent beings from other planets artificially influenced human evolution. These beings were the antecedent of all human religions. Also, they built the Pyramids.

Jews, through their banking and finance connections, run the entire world.

Kennedy was murdered by the CIA, in conjunction with the Soviets, the Mafia and possible Aristotle Onasis. Lee Harvey Oswald may have been involved.

Lemuria was an ancient continent which was first settled by aliens in roughly 100,000 BC. Later it sank beneath the oceans.

Mars was once home to an advanced civilization whose ruins, including a mile wide relief of a human face, can still be seen today in the region of Cydonia.

No one ever set foot on the Moon. NASA inexpertly faked the Apollo missions in order to avoid losing face in the Space Race, or perhaps because they didn’t want the public to know that the Moon is home to a massive UFO base.

Occult groups, including the Freemasons, the Illuminati and the Trilateral Commission, have secretly been controlling the world for thousands of years.

Remote Frequency Identification Tags are implanted in people’s noses by the government and by aliens so they can keep track of everything.

September 11th was a purposeful act of deception orchestrated by the US Government. Controlled demolitions, rather than hijacked airplanes, actually destroyed the buildings.

The best way to utilize the unlimited power of the Mind is slightly alter the shape of table ware.

Underground UFO bases exist in the Himalayas. For years the Draconian Reptoids have been in contact with the Masters of the Hidden City of Shambala.

Volcanic eruptions are triggered by the close approach of Earth’s second moon Lilith.

War between the Grays, the Reptoids and the Nephillium caused Molad, the paradise planet between Mars and Jupiter, to be destroyed, thus creating the asteroid belt.

Xenobilogists have proven that catfish are direct descendants of extraterrestrial fish brought to Earth two million years ago by comets.

Years ago, all African people had bird like wings, enabling them to fly. Then, a mad scientist created white people who took over, driving the Winged Africans into extinction.

Zygotes develop a soul after the eighth cell division.