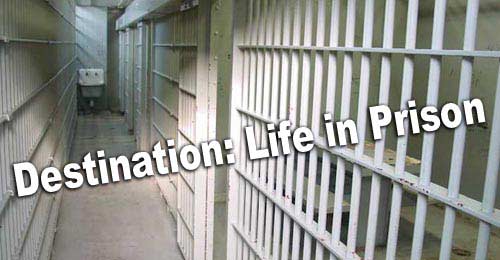 First of all, for the record: Riker’s Island sucks. Seriously, they make you eat baloney! Then you actually have to write your award-nominated column with crayons on toilet paper because they say you’re not allowed to have anything sharp. All while making you listen to alternative Christian rock. And don’t get me started on having to “spread my cheeks.”

Then the Axes & Alleys/Movable Type Printing lawyer comes in and tells you you can burn in hell, don’t ever call us collect, and something about your expense account being larger than the gross domestic product of Guatemala. Like, that’s not even that much. Guatemala’s pretty damn poor and muddy. So now I have this stupid public defender named, get this, Jack McCoy, who did say that my 1,832 indictments are actually a New York state record. But then this moron says that he wouldn’t smuggle me in any nachos and also that he was going to do me an insanity defense. I’m not even insane!

So I tried to smack him upside the head with a chair, but the guards caught me and shackled me. My arms and my legs. It sucked, because my nose itched and the stupid lawyer wouldn’t even come near me to scratch it. I had to use the table top, but then they tied me up even more because they thought I would be a danger to myself. It was just an itch!

The way these cops and lawyers and judges act you’d think they’d never seen anyone take a stolen tank for a joy ride and crash it into Air Force one. It wasn’t even my fault. Tanks are hard to steer, okay, and it turns out the lieutenant in charge of maintaining the tank had removed one of the control bars for cleaning. Like I know much about braked differential steering anyway.

Then these people are all going off about all these extraditions and outstanding warrants. Like, whatever. There’s no proof I’ve been anywhere.

It’s not too bad though, I guess. I’m gonna try and get President Armstrong to pardon me, because one time he gave me a ride and I think he’ll remember. Plus, you can make a killer drink by mixing bread, orange drink and sugar and leaving it under the bed for a while. Also, this one section of my wall is kinda loose. Think I might be able to pry it loose and escape through the air ducts. We’ll see. If I can just get me a poster of Freddie Prinze, Jr., I’ll be set.

Well, I’ll be sure to keep you updated. Don’t worry, faithful readers, no prison can hold me for long. Not when I’m hankering for some nachos.

Editor’s Note: As of this printing, forty one new indictments have been brought against Ms. Stalin. Pending the outcome of her various trials, Ms. Stalin and the column “Katie Stalin: Out and About” will be on indefinite hiatus.