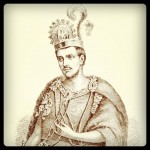 Dear Montezuma,
My neighbor is constantly trying to borrow my hammer. Just in the past three days, he has asked me once. I know that if he borrows it he’s going to use it to hammer things such as nails and scuff it up. How can I politely decline his request?
Thank you.
George Osborne
Chancellor of the Exchequer
11 Downing Street, London UK

My but it has been ages since you last enclosed a missive within the confines of the electromellifluous aether. Why, the last time one of your communiques reached me my assistant at the time, Gregory, was still using Eudora to check the electronic mails and delaying completion of his work tasks via the Prodigy service!

As for your noisy neighbour, have you considered not lending him the hammer? That way you will not be subject to his weekend projects such as the 1/72 scale stack of wooden oranges or his continually-expanding art piece “Hammer Head Circles in Wood.” You might at once also consider lending him your ball peen rather than claw hammer. Certainly I would not suggest the lending of the sledge.

Frankly I am simply aghast at your suggestion that I might microwave the skull of Oliver Cromwell. If I weren’t publishing your letter myself I might consider it slander. When I microwave skullparts, such as brain pans, occipital lobes, supra-orbital ridges, or mandibles, I choose only the finest in monarchist pates!

Montezuma,
Recently my Supergrip 9000 failed to bend paper. I believe it is defective. Does this mean my wife is two-timing me?
Senator John Edwards
North Carolina, US

Yet another letter arrives from you on the subject of paper bending. First you wanted advice on the proper folding of origami swans using Wolframite-coated papyrus. Next you wrote seeking a hint or two on the proper techniques for bending, if not folding, newspapers using the rear left wheel of a Bester Motors Flechette. Not two months ago you were concerned about drying a stack of wet napkins and their un-folding of all things!

As you well know the Supergrip 9000 was not actually designed to bend paper, it was merely found to be capable of doing so in the right laboratory conditions. The marketing team at Supergripsco of course set upon this as another selling point. Most of the footage one sees on the televisual radio is doctored. 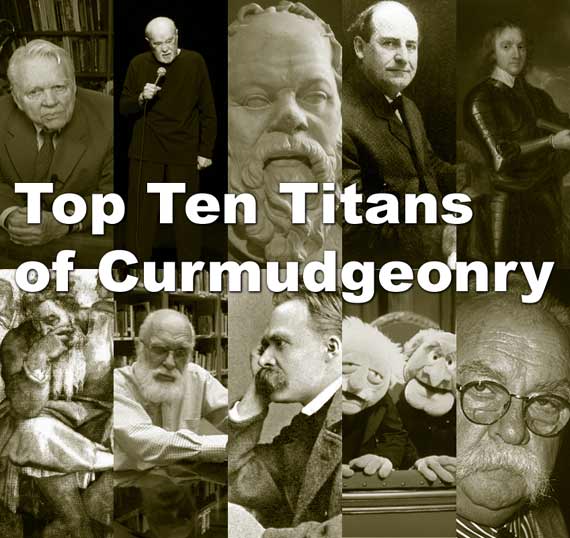 Andy Rooney
Called a humorist by “the free encyclopaedia anyone can edit,” Andy Rooney is the modern epitome of curmudgeon. For decades now, Andy Rooney has made a career over complaining that things aren’t as good as they used to be. You see, apparently back in the day the music had fewer Negroes in it, women wore skirts, and everything was full of puppies and rainbows, candy tasted better, gas was cheaper, and telephones were attached to walls for Christ’s sake. Sure, movie popcorn may have tasted better back in the old days, but I’ll take slightly less flavour-full popcorn over say, spending my days in an iron lung because of polio. Nothing you say or do will keep Rooney from spouting his nostalgic babble each week, because if we ever got rid of Andy Rooney someone new would just come along to complain about how good things were back when Andy Rooney was around.

George Carlin
Believe it or not, there was a time when George Carlin was actually edgy. Of course, this was also back in a time when the adjective edgy actually meant someone was subversive. And despite his stint as Mr. Conductor, Carlin really was subversive and funny and irreverent. Unfortunately, over his five decades in comedy Carlin has slowly graduated from observer of overt ridiculousness to white-haired and cranky curmudgeon. And not a particularly fanciful one, either. Edginess and subversion, unfortunately, come with an expiration date. Guys in their seventies complaining about how everyone wears backpacks these days have traded in their street cred for curmudgeon-hood.

Socrates
History’s first recorded curmudgeon, Socrates shows up everyone ever with how things used to be. You know why? Because he didn’t complain about how things used to be. He complained about how things were and pissed off everyone doing so. And he was good at it. So good that they killed him. Okay, you know how two year olds are really annoying with their questions once they learn to talk? Imagine a sixty-year old guy with nothing to lose behaving like that. That was Socrates. Religion as practiced by the populace was a sham. Virtue was an illusion of ignorance. Integrity was something only the dead possessed, and barely even then. We’d kill ourselves too if we were that good. The only direction to go would be down.

William Jennings Bryan
Combine liberal leanings, the sternness of Scottish religion, and a capably analytical brain which conveniently ignores painful facts, and you’ve got the makings of a lot of crank. And, basically, that was most of why Bryan was a curmudgeonly man, even by 19th Century standards. Bryan is famous for two fits of pique: The Cross of Gold and The Scopes Trial. In the first Bryan brought out one of the most curmudgeonly examples of over-exaggeration in the history of spoken American English when he said “You shall not press down upon the brow of labour this crown of thorns, you shall not crucify mankind upon a cross of gold.” Jeez W.J., it’s only the value of the dollar, not sister Betty’s virtue. In the Scopes Trial Bryan took to court to help in the prosecution of a science teacher for teaching science. Now, we’re not going to get all science preachy here, but come on W.J., that’s like prosecuting a chimpanzee for having opposable thumbs.

Oliver Cromwell
There’s basically one plot that they recycle for every Christmas movie; some heartless, greedy fiend is going to hatch a plan and only the plucky heroes can help Santa save Christmas. Well you don’t see any of them running to the rescue of the Commonwealth where Oliver Cromwell actually did ban Christmas for eleven years in the 17th Century. How’s that for curmudgeon? Not only did Cromwell ban Christmas, but he outlawed theatre, gambling, bear baiting, and basically everything else fun. The only thing he did allow was work and church. That’s a curmudgeon for you. But, if nothing else the period of the Protectorate at least proves once and for all that there is no Santa Claus.

Samuel
Right after his friend God (subject of his own article), Samuel comes traipsing into the curmudgeon charts. Samuel was so much of a grump that he would go out each year on a circuit throughout the land to tell people just how bad they’d been and that they needed to repent. For Samuel, things were always better back when the people didn’t worship Baal. Of course, with God whispering in his ear we can’t completely blame Samuel for his behaviour. But still, anointing the king (twice!) and then telling everyone how much better judges are than kings is just this side of gauche. Even when dead, Samuel raises a ruckus at even being bothered, as if he had much else to do.

James Randi
Old, bearded and crusty James Randi claims to run an “educational foundation,” but in reality he just spends his days pointing out how everyone else isn’t as smart as he is. And he tries to tell jokes. Except, he’s exactly like that old guy at every family reunion, who tries to tell over-memorized jokes and still messes them up anyway. Of course, only he gets the jokes away, but that doesn’t matter either because if you don’t laugh, he just coughs and then points how you’re not as smart or clever as he is. It doesn’t matter if he has an asteroid named after him, he’s still just an old guy who complains about people and that makes him a curmudgeon by any definition.

Frederick Nietzsche
Nothing was ever good enough for Frederick Nietzsche. So, he spent his lonely, unhappy life writing down his ideas about how everything wasn’t good enough. In fact, he even believed himself to be a superman, despite being a useless, over-educated, pathetic drunk. Apparently, all the people who actually had jobs just weren’t super enough, not like ol’ Fred. Well, maybe having a nice moustache is all the license you need to complain about everyone and everything.

Those Two Guys in the Balcony from The Muppet Show.
Statler and Waldorf just really didn’t like anything, did they? All those felt-covered puppets were working hard to get the show together and these two never did anything but complain. Kermit was always stressing out and just trying to entertain the nice people and these two old, useless guys were just picking at every little problem or joke or gag, without contributing anything. They just lived the true curmudgeon’s life; sitting there, doing nothing but complaining. If only a tomato would miss Fozzie and hit them instead.

Wilford Brimley
Little hasn’t already been said about the man rounding out our top ten curmudgeon list. He says diabetes funny, he’s an activist for cockfighting, and he made a lot of commercials about oat meal. Any old guy who’s out there, using their gruff, unpleasant demeanour to help sell oat meal is definitely a curmudgeon. In fact, you can, as a rule of thumb, be sure that any person who tries to talk to you about oatmeal and diabetes is a curmudgeon. For curmudgeons, oatmeal and diabetes are like sex, drugs and rock n’ roll. They can’t get enough of them.