“Tell them we’re under attack. Tell them it’s the-“
Anyone familiar with the series will know it’s the Narn attacking.

Season 1: Signs and Portents
Episode 1: Midnight on the Firing Line

Which brings up a quandary in writing this series. Do I avoid all mention of what is to come or do I try to leave some mystery? At least for now I will approach the writing of this series with the understanding that the reader has some familiarity with the show.

I’ve decided not to reveal major plot points from future episodes, but that won’t prevent me from mentioning the future. After all “Midnight on the Firing Line” sets up almost every major premise from the show and it would be a shame not to point this out.

Another thing I want to avoid are synopses. Watch the damn show, that’s the point. If you want the capsule plot arc, take a look at the Wikipedia entry.

One thing I have undyingly disliked about this show are the titles telling you where (and sometimes when) you are. Series creator J. Michael Straczynski is better than this and he was better than this at the time. Show me a planet, fill in the rest with dialog later. Christ, if George Lucas will dumb it down that far, you should be able to do so as well.

Still, after all of these years I still love the intro. Look at that space station! Have you ever seen anything before or since in film or television? It’s huge, it spins, it has giant vanes! Seeing the station being built is such a nice touch behind the iconic voice over.

If you’d never seen the show before (and apart from a little early-90s syndicated television cheesiness) this intro really does help create a sense of adventure and mystery. Learning that the series takes place in 2258 means it’s far enough away to be different, but not so far that it’s alien. I like being reminded of this every episode.

In this episode habits are introduced. Species behave certain ways; are habitual. The characters have habits. Sinclair is usually found at a specific time of day for ten minutes with his link off. Later on we find Ivanova can usually be found in the casino bar when her shift’s up. Garibaldi seems to be the one to point this out to everyone.

These types of specific habits are not terribly important to the characters through the rest of the series; they never repeat them again. However, each sets up a habitual trait for the characters. Sinclair’s introspection, Ivanova’s solitariness (especially with a drink), even G’Kar’s habits open up his later development.

On a side note, this episode introduces Delta 7, a Starfury designation which appears throughout the rest of the series. This is also where we see Starfuries in action for the first time. They have a cool name, they manoeuver with various thrusters, and their tactics reflect this. Love it!

When it comes to characters there are three (maybe four) that stick out for me in this first episode. Londo is, at first blush, almost a buffoon. His hair a shambles, almost a shyster to Garibaldi, his protestations of Centauri greatness coexist with an acknowledgement of his lack of station. Viz. his pronouncement “This is it,” when introducing Vir as his diplomatic staff.

This episode initiates and explains from start to finish one of my favourite pairings of the series: Londo Mollari and G’Kar. Londo’s clownishness initially couples well with G’Kar’s outward perfidy and pettiness. We learn Londo will die in 20 years at G’Kar’s hands, which also allows Straczynski to introduce an element of mysticism. Somehow Centauri can often see the moment of their own deaths. 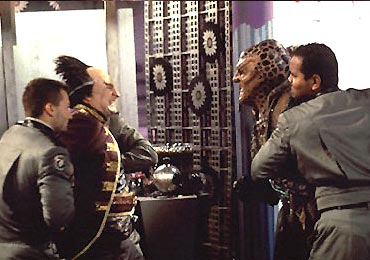 Still it is Londo who appears to have depth in this episode. G’Kar is definitively more than a one-dimensional opposition, but barely. His characterization here can hardly be said to presage G’Kar’s future spiritual flowering, which perhaps makes it all the more surprising. Is it the fool who still believes he is mighty continuously realizing he’s not who is the more pitiable character? Or is it the once warrior and now small tyrant?

That these two are a microcosm of the greater conflict between the Narn and Centauri is obvious, though Londo is at the time is unimportant and unable to press political change. Both cultures also resonate with pre-World War II European conflicts; the taking and ceding of land, the just punishment of the vanquished, and the heavyhanded scheming for gain.

Ivanova is interesting to me because, like Stephen Furst’s Vir, Claudia Christian comes to the role already with a firm grasp of who she is. Christian seems to have the least need to establish a baseline for Ivanova who is both officious, competent, and cold, but with personality. In fact my one complaint about the character is that she’s written as too much of a Russian stereotype. The obviously-Russian lines sound clunky and stilted.

Her conversation in the casino with Talia Winters is a fine explanation of a major background element (the treatment of telepaths) without beating the audience over the head with explanation. That Talia was brought up within the Psi Corps is the perfect foil for Ivanova explaining what it’s like from the outside. She already has a good working relationship with Sinclair, who seems to trust her enough to know she will bend the rules for him.

Definitively not fully-formed yet is Garibaldi. Compared to the character I come to know over five seasons, this Garibaldi is quaint. He doesn’t quite show Garibaldi’s deviousness and all of his humour falls flat. In fact, Jerry Doyle’s delivery on the serious notes is much better. This certainly gives the character much more room to grow, though it’s at first hard to see what importance the man will play while all the mystery surrounds Sinclair and the Minbari.

I really enjoyed seeing Garibaldi and Delenn watching Duck Dodgers at the end of the episode. It hearkens, for me, to several future episodes explicitly about the comprehensibility of one culture to another. Most directly is the Season 5 episode “Day of the Dead,” featuring Penn & Teller, where the guest stars explain in some depth the different bases of comedy for each culture. More immediately the upcoming Season 1 episode “The Parliament of Dreams” will cover the same idea relative to religion.

Initially you’d come to think of Babylon 5 as a hyped-up United Nations, which is somewhat true. It’s set up for the purpose of peace, but I think series creator J. Michael Straczynski is already hinting at the Season 3 opening when the episode starts in fire and ends in tension. None of the great powers will take a stand and the minor powers as of yet only play a small political role.

In the end I find it interesting that the first episode of the series solves a conflict through no official action at all. As if the station’s intended function is irrelevant. So much appears to hinge on personal interaction, which is really what the series itself hinges upon.

Having seen the rest of the season, I believe “Midnight on the Firing Line” is one of the best episodes of a generally poor season. Where Season 1 steps away from the core plot into serialized episodes, it invariably fails (such as the episode “Infection”). But in episodes like this and “The Parliament of Dreams,” the season lays down its future legacy of great writing and characterization.

One Reply to “Midnight on the Firing Line”