1993 was about the only year in which I was an early-adopter. Sure, in 2001 I was using the very first iPod, and in 2007 my hands clutched the first-generation iPhone. That these are both Apple products is probably coincidence. They are both cool tools and it’s perhaps the coolness that ties these both to 1993. That was the year Babylon 5 dipped a toe in reality.

While I’m not sure when exactly the phrase was first used to market the show, I’ll go along with the posters saying that Babylon 5 was lightyears ahead of anything on television. The pilot film was something I saw upon its initial release and, though crude, 13 year-old me was hooked.
Space opera I understood. Star Wars, with its archetypes, loose-playing with the scientific facts, and space battles was obviously The Wizard of Oz for my generation. Science fiction in written form was something I embraced fully on my own without influence from peers or parents.

Deluging myself with Bradbury, Asimov, Niven, Heinlein, and the one-off auteurs of the genre, the scope of ideation struck home. That people could think of predicting the future of humanity by using mathematics or inspire beauty through the collapse of a far-gone civilization sparked my imagination.

Any true student of the genre will admit that characterization was lacking in the early writing. Heroes, while they may not all have been blue-eyed, blond-haired heroes with big pecs, were still rather flat. Women might be brainy, but for the most part they had tits. Heinlein wanted us to fuck our sisters.

This is where I was pushed into the written work of short science fiction and written space opera. While I grappled with the allusions and metaphor of Dan Simmons’ Hyperion, I broke ground with the collected year’s best series edited by Gardner Dozois. These showed sci-fi at the depth of character study, operatic counterfactualism, and fantastic ideas tied concretely to scientific fact.

In this mélange I fell in love with Babylon 5. 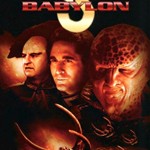 Now I’ll come clean and admit I don’t really remember seeing it for the first time. I’ve seen The Gathering (the pilot film) maybe ten times in the intervening 16 years, but I at least recall a sense of wonder here. Of course I’d seen Star Trek: Deep Space Nine by this point, but who cares. That show was horrible.

What I saw here was something I’d never seen before on television: a mostly-realistic idea for a space station, obvious and grander character and plot arcs, computerized animation, aliens with varying levels of technology and awesome speeches!

The characters and plot were, I think, what hooked me. From the beginning it was obvious this was a story just beyond what seemed possible at the time and that it would take me through something grand. However, it was the focus on character that was obvious.

It wasn’t, I think, a conscious comparison, but after the fact it’s easy to see that Sinclair, the captain of the station, was no archetypal Kirk or neutered Picard. It also wasn’t quite clear what he was because The Gathering, like Season 1, suffered from any show’s budding familiarity with its material. Still he was none of the Star Wars protagonists or Hari Seldon. I do think Sinclair owes something to the Martian Chronicles and at least half reminds me of Fedmahn Kassad from the Hyperion Cantos.

At any rate I can’t put my finger on it exactly, but I waited for a long time, much of the next year in fact, before the show made it permanently (mostly) on the air. When it did show up again, the aliens were a bit softened, the visual effects heightened, and the arcs still only a hint. Good friends familiar with the show would rather forget that first season, and we’ll discuss that more at length later.

Babylon 5 continued to be an important piece of literature for me over the ensuing decade and a half. And yes, I do consider creator J. Michael Straczynski’s work to be literature. It is referential without relying upon reference, the characters speak with something exactly between realism and Shakespeare, the score of Christopher Franke was fantastic and only suffered from the fact it wasn’t recorded by a real orchestra, and while the visual effects have not stood the test of time they destroyed anything available then. Archetype is used, but only in an over-arching way; every conflict retains humanity.

Through the show’s five seasons I became an adult, watched the show with a couple of girlfriends, moved to another state for college, stayed there, and started on the rest of my life. The show left a mark on me, one which indelibly affected my perceptions of morality, human interaction, fiction writing, and comedy.

It took the revolution of DVD to bring me back into the Babylon 5 fold. This took place almost four years after the show ended, by which time I was working on writing for filmed entertainment myself. So it was with a new eye and a good friend who had never seen the show previously that I delved into the magnum opus of J. Michael Straczynski. It caught fire with my friend, too. He had his criticisms (some of which I’ll mention in writing this series), but he too found a touchstone for literative screenwriting in the series.

Last week I lazily brought up Babylon 5 at Hulu.com when my queue ran out and watched the pilot. Whilst watching I again caught the bug of why I loved this show so much; why it had such an influence. In my head I began critiquing the first season, thought of how to explain this show to others, and hit upon the idea of writing about each episode as I watched it all over again.

Of course I’ve watched through the entire series at least a dozen times over the years, delving more into nuance, questioning, studying, learning, but never have I written down my reactions or my experience.

And so begins my current project.

From hereon out I will bring you an entry with my reactions for each episode of the series. Where I can I will link to the episode online (wherever I believe that will benefit the show’s creator). We will explore the show through what I consider the main body of work: Seasons 1 – 5.

Upon completion of this review I will likely turn back to The Gathering, the made-for-television movies, and The Lost Tales. Only the first and last of those do I consider on-par with anything the main series produced. While I enjoy the spin-off series Crusade, I don’t particularly wish to cover it. If there’s enough of a demand, I might, but it’s not anywhere close to what Babylon 5 is.

So here we go! Expect a couple of updates a week on each episode of the series. If you, my audience, demand it, I might increase those updates some more.