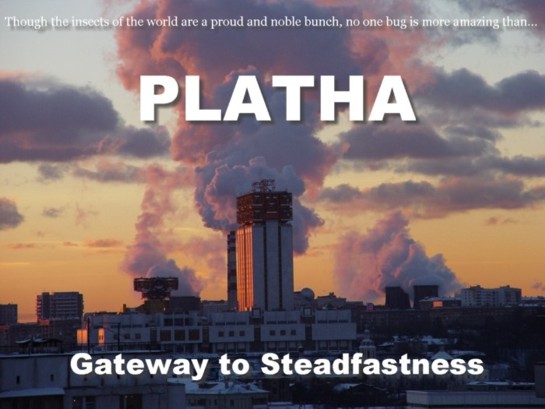 The Iron Tower: The world-famous Platha State Union Building stands like a sentry over picturesque downtown Plyon, the capital of the State of Platha.

Like Arizona, Platha was the last of the lower continental states to come into being. Yet today it is a respected and feared part of the Union; at once proud, belligerent and striking in its simplicity. The mystery of Platha is a smokescreen which it is difficult to denigmafy, but we shall attempt an explanation here.

Founded by refugees of the Bolshevik Revolution of 1919, Platha joined the Union in 1924. Though the 1926 Supreme Court ruling in the case of Disraeli v. Pumpkin forbid Platha from adopting Russian as its official language (causing state prosecutor general Alexander Pumpkin to resign), the plains of Platha brought hardy parlor pinks in droves to the state capital of Pylon, once home to a Native American fishing factory.

Alexandre Borschtov, the state’s first governor was elected in 1926 and ruled until his death in 1991 owing to Article III of the Platha State Constitution which disallowed term limits for governor. It should be noted, however, that no other Plathan governor has held the office for more than eight months. For the first 52 years of its existence, Platha was unique among the states in its refusal to send a Congressional delegation to Washington to conduct legislative business.

Known by its unofficial nickname, “The Iron State,” Platha has little that is official, save for their state political party, The Platha State Union, and their official newspaper. There is no state slogan, song, bird, insect or flower. Stranger still is the fact that Platha University, in Crustacean, fields not a single intercollegiate sports team, be it in football, rowing or competitive chair stacking. The state flag of Platha is a statuette of a silver, six-winged eagle atop a 37 and a half meter poll.

Much of Platha’s isolation is due in part to the fact that in 1956 the U.S. Army Corps of Engineers erected a 16 foot high fence around the state, walling it off from the rest of the country. After the Red Scare abated, Platha continued to maintain the fence. In 2002, Governor Alexander P. Tesla began electrifying the fence, adding guard posts and search lights, among other general reforms. Platha remains one of the few states with a strong militia. During the Gulf War, the 2nd Platha Volunteer Regiment succeeded in invading Iraq and establishing a military controlled zone over several Iraqi oil wells, refineries and shipping centers. The Platho-Iraqi MCZ was held until 1998 when it was sold to Petroil Co. for an undisclosed amount.

There are four major cities in Platha; Pylon, Chrandrasekhar, Crustacean and Alexandregrad (formerly Piltdown). According to the state constitution, these cities form the Centers of each of Platha’s four Population Zones (designated as One, Two, Three and Four). There are also two Manufacturing Zones (North and East), four Mining Zones (One, Two, Three and Uranium), one Military Zone (Fort Picket) and two Forbidden Zones (Palatta State Park and River Rock National Forest). Construction, mining and forestry are forbidden in the forbidden zones.

Mining is Platha’s main industry, mostly in uranium, bauxite and marble. Important manufacturing goods include furniture (end tables and other tables), house-wares and automobiles. The Platha Motors “Car Mk. V” is the state’s most popular consumer vehicle, while the “Truck” and the “Motorized Bicycle Mk. III” are popular with the youth.

Economically, Platha is geared toward self-sufficiency, its only export being uranium (and during the period of the MCZ, oil). When the U.S. voted to nullify Platha’s Uranium Export Treaty with the E.U. on the grounds that a state governor was not constitutionally authorized to enter into treaties with foreign powers, the Platha Energy Consortium (P.E.C.) began selling uranium through D.B. Inc. to the U.S. Department of Energy.

Law and Order are in Session: The Platha State Capitol Building in Pylon.

There have been several Supreme Court cases involving the state of Platha and unfortunately for the plucky Plathans, nearly every case has been decided against them. Plathan lawyers have almost always argued the 10th Amendment, but the Justices have consistently disagreed.

In Reno v. Platha, it was ruled that Platha’s Alien American ID law was unconstitutional, forcing the state Department of Restraint to abandon its plans to have all non-Plathan visitors tagged with radio transmitters for tracking purposes. The Court has also rejected Platha’s Universal Solitude Act, the so-called “Control Ordinances” and the laws which had attempted to suspend suffrage within the state’s borders.

Recently the Plathan Radio and Television Jamming Array outside Catatonia was declared to be operating in violation of F.C.C. regulations. Governor Alexander Fonnem issued a protest which stated that: “All the citizens of the sovereign state of Platha hate television and radio and do not wish to view or hear either.” Platha side-stepped the overturned ban on magazines by placing a ban on the import of glossy paper. The SCOTUS has yet to rule in the case of Go Icecream! v. The Platha State Union.

In 2000 Platha gained a unique distinction, being the only state ever censured by a joint congressional resolution. This was of course the result of the so called “Pylon Incident” which involved, among other things, the murder of 11 I.R.S. agents by the Platha State Militia, the subsequent burning of the Pylon Federal Building and expulsion of all Federal Government personnel by the Governor’s Private Guard. In the summer of 1999 Platha was placed under martial law by order of the President. As National Guard troops were unable to enter the state’s borders, a special “Martial Law in Absentia” precedent was created. 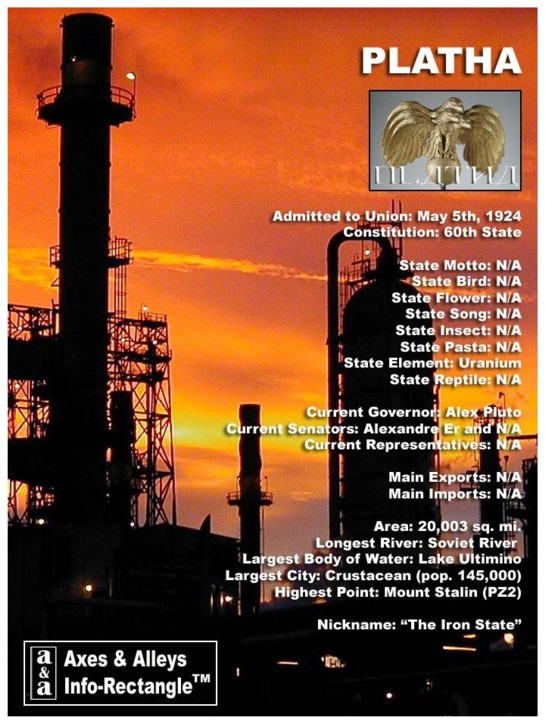 After the resignation of Governor Alexandra Bottom, the Martial Law in Absentia was lifted, although in retaliation Platha’s Under-Governor for Commerce banned five dollar Federal Reserve notes throughout the state. This restriction was lifted in late 2004 in exchange for fresh Floridian pet food imports.

When Representative Alex R. Ramitanov (PSU-Platha) recently proposed a bill which would have allowed Platha to annex nearby Colorado, it was voted down 638 to 3. Strangely, a similar measure which would have allowed Platha to annex Roosevelt Island, NY was a greater success, being voted down only 637 to 4. It is interesting to note that in 29 years of legislative activity not a single bill proposed by a Plathan representative has been passed. This is partly owing to the fact that the Plathans show up to sessions only on November 11th as part of their traditional Martinmas celebrations. A proposed constitutional amendment which would eliminate Platha altogether, dividing its territory amongst the bordering states, has only been approved by 17 state legislatures thus far.

Education and literacy rates in Platha are among the highest in the nation and official reports from the Platha State Prosecutor General’s office show that year after year Platha is free from crime of any kind. Slowly but surely, Plathans are beginning to adopt the Roman alphabet, although the local version of the Cyrillic is still popular.

State-wide badminton tournaments are held every six years and are immensely popular. The top two finalists compete in both the championship game and the Senate race. The majority of Plathans are content to work in mines, subsisting upon vodka and frozen beets, enjoying the occasional distraction of a Gubernatorial address or tractor parade. It is a simple, hardy existence, well-tailored to the primarily Russian, Basotho and Punjabi population.

Throughout the 79 years of its existence Platha has remained a puzzling, yet treasured, enigma. Though often at odds with the rest of the nation, Platha has a real place among the 60 states of the Union. Platha gives America brave soldiers, tough miners and even sitcom star Topher Grace.

Over one third of all Supreme Court cases now involve striking down unconstitutional laws passed by the Plathan governors. While Platha is sometimes feared, sometimes hated and altogether queried over, America just wouldn’t be America without our fenced-in rabid dog of a state; Platha.

For more information go to
www.stayawayfromplatha.gov