Often the popularity and longevity of stories and myths lies in the strength of the central antagonist. Christian mythology follows this trend, as its villain remains one of the most compelling and infamous characters in the whole of literature. Despite the integral nature of Satan within Christianity’s cosmic drama, the character is not a purely Christian construct and receives only limited mention in the Bible. The character, known alternately as Satan, Lucifer, the Devil, Beelzebub or the Beast, is an amalgamation of pagan Celtic and Greek, Hebrew, and Zoroastrian figures molded into its most recognizable representation by early Christian theologians, Medieval European philosophers and writers of the Renaissance.

The different attributes and images attributed to Satan by these varied and distant groups created, over time, a character that remains one of the most engaging in all of literature; a horrific monster, a cunning enemy and a tragic hero. The changing views of this character parallel the changing political and religious climate in European society.

The first accounts of a Satanlike character in the annals of religious story telling come from ancient Persia and the traditional tales which formed the basis for the dualistic religion known as Zoroastrianism. The teachings of this religion tell of a universe ruled by two diametrically opposite forces; Ahura Mazda, which represented light and goodness, and Angra Mainyu, which represented darkness and evil. The chief servant of Angra Mainyu was the dragon-god Azhi Dahaka, who was one of the Drujs, a group of wandering evil spirits who inhabited the Earth and sky.

Azhi Dahaka was seen as the embodiment of lies and falsehood and was eventually defeated and bound up with chains in darkness and flames. This illustrates obvious parallels with later Christian traditions of Satan, seen in the Revelation of Saint John the Divine as a dragon, who is bound up in the fiery darkness of Hell, and is known as both the Father of Lies and the Prince of Darkness.

The strong correlation between these two accounts is due to the fact that the early Christians in Syria and Arabia borrowed the Zoroastrian concepts in order to philosophically balance their ideas of the metaphysical universe. If Jesus Christ represented pure good in the world, there must also be a personage who could represent extreme evil to achieve a state of balance in the world. Early Gnostic sects continued the Zoroastrian ideas by teaching that God had two sons, Satanael and Jesus, each representing darkness or light.

It is not uncommon, however, to find early Christian theologies which incorporated local religious traditions. As Christianity spread from Palestine the practitioners incorporated a variety of different ideas into the religion in order to encourage conversion and to facilitate assimilation of new believers into the Church.

In areas with Greek pagan religions, the Satyrs, such as Pan, who were known for their sexual behavior and drunkenness, were used as the basis for the devils of temptation. Thus, Satan began to take on Pan’s form, that of a human-goat hybrid with horns, cloven hooves, beard and forked tail. In the Celtic areas of the British Isles, the Roman Christians identified the horned god Cernunos with Mercury, who was said to deliver the dead to the underworld. Due to the antlers which were depicted as adorning his head, Cernunos was seen by the early British and Irish Christians as a manifestation of Satan and his form determined their picture of Satan.

In Northern Europe, Satan became strongly associated with the Celtic gods and became, in the area’s lore, a black horned beast who dwelled deep in the dark interior of the forest. The original Hebrew writings upon which Christianity built its foundation, however, contained no references to dark, forest-dwelling monsters or even of particularly malevolent spirits. The evil in the world, according to the Hebrew religious texts, was a result of the actions of God or men, although spiritual creatures such as the Nephilim are given incomplete and mysterious mention. Paul, the central author of the texts which would become the New Testament, first uses the Hebrew word Satan, meaning Adversary, to describe a specific antagonistic spiritual personality. 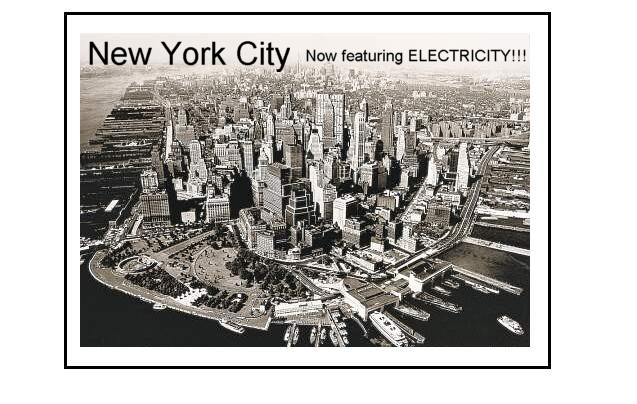 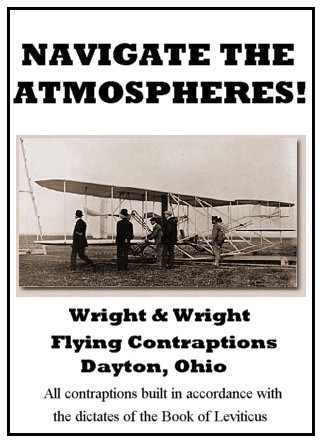 Later translations of the Bible continued this use of the word and incorporated it into parts of the Old Testament. The majority of the early Christian sects, most notably the Greek Christians, saw all the spiritual hosts of the Hebrew writings as servants of God.

The spirits which appeared wicked, according to this belief, were angels whose role was to bring pain to the wicked and deliver God’s righteous punishments upon the Earth. The Byzantine Christians used the Greek term daimon, which denoted a neutral spirit, to identify the ethereal servants of God. This was later changed to daimonia, which denoted a more sinister and negative spiritual being.

At the dawn of the Middle Ages the Christians were left with a theological quandary as to the nature of Satan and the lesser wicked spiritual beings. Two distinctly different and seemingly contradictory philosophies came into contact over the question; the Zoroastrian concept of a supremely and purely evil independent being, and the Greek concept of spirits who acted on God’s behalf to bring harm upon humans for their sin. Many of the notable Christian theologians of the period put their intellects to the task of finding an answer to this question. Dionysius, a sixth-century Syrian monk formulated the idea that only God can create, thus God had to have made Satan and the daimonia.

Just as the Universe was brought forth in a perfect and holy incarnation only to be ruined by sin, so then must Satan and the daimonia have been brought into existence in a flawless and immaculate form only to be ruined by their own sin. Dionysius then formulated the full story of Lucifer’s fall from grace and transformation into Satan. The daimonia then were angelic servants of God who had followed Satan in his rebellion.

Although the story of Satan’s fall began with a few verses in the Bible which hinted at similar themes and actions, the incorporation of the tale into the whole of Christian mythology began in the early Middle Ages. The tale of Satan’s fall was also elaborated upon by St. Augustine, who described how Satan, after his fall, came to the Earth and subdued it by enticing the first humans to sin and subsequently ruled over the world and used human beings for his own malicious entertainment in order to wreak vengeance upon God.

These different ideas of a fallen angel who embodies pure evil, with minions representative of pagan deities, were all incorporated in the Medieval European view of the character of Satan. Following Augustine’s ideas of Satan inflicting spiteful harm on humans for his own amusement, the Satan of the Middle Ages was seen by European peasants as a veritable boogey-man.

The folklore of the age describes how the Devil would assume various guises in order to tempt innocent people into sin. Once a misguided person gave in to the provocations, they would be captured by the Devil and carried away screaming to Hell. The folklore also tells of Satan or his minions waiting in the forest for unwary travelers, who they would grab up and devour whole.

Medieval scientist-philosophers went so far as to place Satan in their zoological surveys, or Bestiaries, giving him the taxonomy of a dangerous and deadly animal. The Devil in this period was seen as a deformed creature, usually black, the color of darkness, or red, the color of blood and lust. Animalistic descriptions were not always valid however, even in the Middle Ages.

Through the glass of the Medieval political system, Satan was described by the Church as a sort of perverted version of a feudal lord who would buy the souls of humans and in exchange would provide them with the power to perform evil acts upon the world. Like a feudal lord, Satan would also rule over his vassals, in this case a vast array of animals, creatures, demons, spirits and witches. In the Medieval world, Satan was thought to be the cause of all wickedness and harm that befell those living in the world. Though it coincided with the Witch Craze, a time when the view that Satan’s power threatened to destroy all of humanity was brought to its most horrific fulfillment as thousands were executed for supposed witch-pacts with the Devil, the Renaissance brought about a major change in the way the world viewed Satan and his counterparts.

The rise of humanism, the idea that individual human beings have inherent worth, capabilities and potential, diluted the popular notions that the deformed, monstrous Satan could easily tempt and corrupt innocent people. Images of Satan and daemons in the Renaissance became more majestic and powerful. The horrific, chaotic and ugly Satan was replaced by a more orderly and adept figure better suited to the new Renaissance worldview.

The newly founded Protestant Reformation, an outgrowth of the humanism brought about by the Renaissance, challenged the autocracy of the Roman Catholic Church in the early sixteenth century and brought new theological concepts to Europe. Writings and artwork of the Reformation leaders created a view of Satan more congruent with their own ideas about the nature of God and his relation to humanity. Reformation works usually depicted the Devil adorned with crimson robes and fine jewelry and gold embellishments, in order to demonstrate their ideas of the evil of the Papacy and the Roman Church. 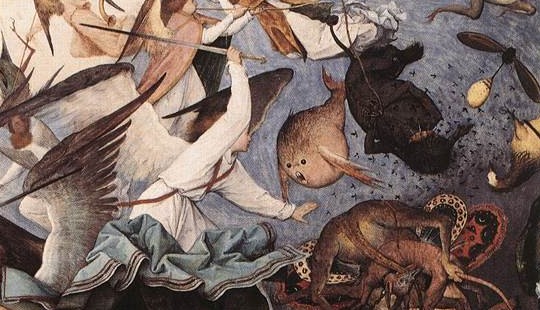 A FISH TO FRY: The Archangel Michael Expels Satan from Heaven
(Note Satan is Here Depicted as Comical Blowfish-Type Creature)

These ideas about Satan, as well as the other tenets of the Protestants proliferated throughout Europe in the years following their inception. By the time of the seventeenth century, when Englishman John Milton produced Paradise Lost, the world’s image of Satan had been irrevocably altered from the Medieval idea. Whether or not Milton’s work caused this change, Paradise Lost, based on the tragedies of Classical literature, fully illustrates both the degree to which the philosophical ideas of the Middle Ages had been discarded and the impact of Renaissance humanism on the character of Satan.

Milton’s Satan is not a deformed maniac, but rather a tragic hero who embodies a great many human attributes and emotions and is capable of eliciting sympathy from the reader.

The concept of Satan began as an fusion between Zoroastrian, Hebrew and pagan Greek and Celtic concepts, just as the Christian church expanded by incorporating the differing ideas of these same cultures as it spread throughout the world. As early Christian theologians and philosophers used their intellects to create a idea of Satan which could merge differing and conflicting ideologies into a concrete whole, so did Christianity merge hostile and inconsistent cultural ideas into a unifying culture which could fill the vacuum of power left after the collapse of the Roman Imperial State.

In the Medieval world, where artists saw Satan as a disjointed and deformed creature, locked in darkness and devouring humans, Europe was a divided and strife-filled region, trapped in the gloom of superstition and fraught with disease, insecurity and death.

The Renaissance, which brought new life to traditional ideas about the nature of the Devil, and depicted the character in a grand, dignified form reminiscent of the heroes of Classical literature, also brought about new ideas concerning the nature of human beings and their relationship to the Universe, creating a world wherein individuals were seen as capable of achieving true dignity, freed from the autocratic Church and its superstitions and illuminated by new learning, ideas and artistic expressions.