When I give you my money / I wanna hear you say what I want you to / And act like you mean it baby / or I won’t believe you.
Telenovela Star – Le Plum Deux 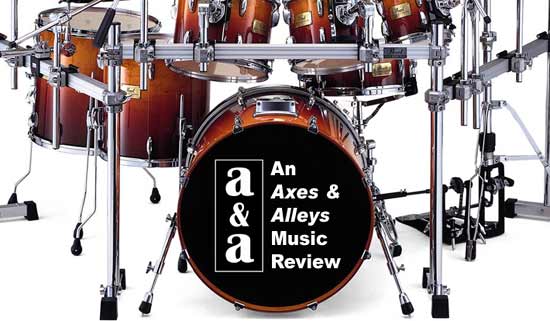 I was not paid to write this review. It might seem that way because it’s glowing, but the truth is I really dig this record and I think you will, too. Now, most local bands I find intriguing see me at virtually every show they perform. Not so Telenovela Star. In the two years of their present incarnation, I’ve seen them twice; once at their debut in the trash can that is the Sibera club’s basement and once this past January at The Delancey, a wonderful club that also just happens to be in a basement.

Four years ago, when you could still enjoy a musical revue and a cigarette at the same time, I caught the previous iteration of the band, Telenovela. At the time the trio was two scruffy dudes on guitar and drums, and a chick with her hair in her face on bass. By the time I grabbed a friend for that Siberia show, two years had passed, they’d tacked “Star” onto their name and dropped the dudes. Here now was Telenovela Star with bassist and vocalist Hanna Klein, Nikkie McLeod beating the skins, and Maggie Argyros on guitar and vocals.

This past January, with a free Saturday in my pocket and braving arctic temperatures, I caught their Delancey show. There, one year after its release and directly from the band I received my first hard copy of their music: The Telenovela Star EP. Since then those tracks have accompanied me everywhere I go. I’ll tell you why.

Their vocal stylings aren’t spectacular and they’re not a flashy ensemble with themed outfits at every show or musicians who spout some bullshit concept when asked about their music. But, Telenovela Star is the epitome of “band.” Each member is a talent in their own right. No, they’re not virtuosi, but they are incredibly good. Few groups, live or recorded, possess their ability to play together, to sound like one instrument with purpose.

At the same time, their songwriting and musicality enable them to showcase one another individually. They’ll give the guitar space in one song, or emphasize the bass-percussion unit in another, or blend the instruments and vocals in such a way as to highlight the best of each. In many ways, each woman as an instrumentalist takes the styles of music prevalent around them and carries those styles forward in startling directions.

Often current guitarists are boring and uninventive. With this beautiful modern history of amazing players to learn from, you still don’t often hear great melodies or a good riff. Modern rockers present neither adaptation nor ornamentation. If you want to go local and find out for yourself, just search the rock section of MySpace, or turn to your favourite major music outlet and listen to what’s popular. It’s pathetic.

Maggie is none of these things, plus she’s from my own neighbourhood of Astoria. It’s sad that technical ability would be something notable merely for its presence, but I find it truly impressive. She’s not flashy, but her style is perfect both in and out of the context of the band. Her full-on guitar lines are hard and always to the point. And another thing: distortion. She doesn’t overdo it, she does it just right. I love distortion done just right. 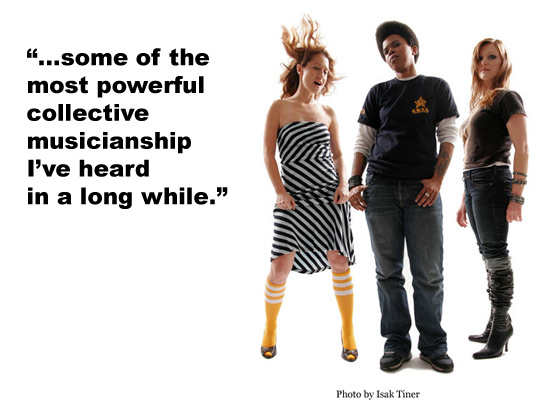 Her solos and vocals are, however, thin in relation to the rest of the work evidenced on the EP. Certainly one doesn’t need a Joe Satriani playing when the band breaks it down, but the songs in which she’s out front don’t display the same level of creativity found in the rest of her work. The singing rather just requires some more power. Techniques not a big deal here, but power is. On “Same Mistake” you can hear her get there a few times and I’d love to hear more of it.

Now, I’ve been listening to rock for many years, and in that time I’ve heard many an amazing percussionist. I’ve also heard a lot of competent ones, and by that I mean they’ll meet the obligation of providing rhythm, but go no further. Coming from a background as a jazz musician, I’ve played with a lot of heavy drummers.

I would gladly jump on stage to play with Nikkie McLeod. She lays down complex, heavy, and completely rock rhythms. Easily adaptable, she moves elegantly through song forms more variegated than verse/chorus/verse/chorus, which are themselves a testament to the songwriting of the band. When you need a straight up, four on the floor rhythm though, there she is dishing it out with no compunctions whatsoever. She and Hanna, with a couple of exceptions on “A Plum,” are also tightly integrated, acting more like a rhythm section than separate instruments.

Speaking of the bass, what you usually find is that it is there for harmonic coherence and isn’t something to be noticed. Often it just backs up the guitars, droning on and on with the root of the chord. That has its place, but few people seem to step out of those shackles and provide something interesting to the ear, adding to the effectiveness of the music.

I’m in love with Hanna’s bass playing. It was the first thing that caught my ear all those years ago. When she does play in the root-only vein, it’s where something more intricate would take away from the song. Her bass lines are dangerous. They’re dark when they need to be dark, they’re melodic, and they’re always brilliantly intertwined with Nikkie’s rhythms and Maggie’s guitar. You rarely see anyone play bass like this in a rock setting, and almost never in the group of contemporaries Telenovela Star has. When you see her do it live, while singing lead or backup vocals, it’s that much more impressive.

“It Was Ugly Most of the Time” exposes the best of her bass playing as well as some of its faults. It’s simply the best bass line on the album, but suffers from her penchant for creating lines going up rather high on the bass. It could be a problem of her amp settings, or the recording mix itself, but the actual melodic wonder of that line gets swallowed up by the loss of power. When you hear the resonance of her low tones, you really want the high ones on the rest of the album to match up.

As for the album, it had to grow on me for a while as it didn’t contain the handful of songs with which I was familiar. At the concert I was drawn in completely by “It Was Ugly Most of the Time,” and was only gradually taken by the rest of the songs on the EP. Once I was, I found the entire experience to be solid, full of poignant harmonies, cynical and witty lyrics, and some of the most powerful collective musicianship I’ve heard in a long while. It’s a fun album, even though the lyrical subject matter is often of pain, loss, and regret.

“Le Plum Deux” is the pure rock opener. Telenovela Star hits us immediately with a running bass line and simple percussion rhythm underscoring Maggie’s wending guitar riffs, continuing with this theme throughout most of the track. I’m particularly fond of the coda ending the song, on distorted vocals bringing us down a few levels after the high energy of the rest of the track.

The vocals are airy, almost careless in their delivery, underscoring lyrics I prefer to take literally. When Hanna says she wants the good stuff, to be bought breasts and love and company, then asks why she “can’t feel alright without you,” does she mean the money or something else? When she delivers the lyrics at the top of this article, it’s hard to discern whether it’s about power over others, or the power others have over you. It’s tempting to find irony in every aspect of contemporary music, but this song shows yearning for the good life, whatever that may be, while being nauseated with all the implications being comfortable brings.

If you’re male and prone to action flick journeys of the imagination, you’ll probably go off on one the minute “Car Song” starts. It’s dirty, backed up with Maggie’s matter-of-fact vocals. “Car Song” was picked up by The N (Nickelodeon’s teen network) to be the title theme for Beyond the Break, a show about female competitive surfers. Might put a dent in inchoate testosterone-fueled flights of fancy, but it’s still a balls to the wall song.

Nikkie’s drum playing on “A Plum” is one of my favourite things on the EP, though this song is one of the least impressive I’ve heard from them live or recorded. What makes the song worth it, though, is the lengthy ending, starting under Hanna’s vocals of “Look what I have…” It builds and builds, creating this fervent, driving query fueled by calls of “Hey yeah.” Maggie lays down some beautiful short passages throughout as Nikkie builds up the pressure, and Hanna’s bass takes it simple to underscore those lyrics. I really want more of that from the song, but I only get about a minute and a half.

“It Was Ugly Most of the Time” is, without hyperbole, one of the best songs I’ve ever heard. Yes, anyone whose been through the horrid drama of a relationship out of control will identify with it automatically, but it’s so pure in that expression, exhibiting every question without answer one asks when things spiral downward. The title reminds you that no matter what happens when you look back, no matter the good times, no matter how much you miss them, everything was wrong. Hanna’s bass on this track is stellar, wrapping all of those sentiments in the impossible hope of someone discarded. Pay special attention when you hit the chorus, where Maggie and Hanna roll through a wrenching duet on “this may take a while.”

The last song on the album, “Same Mistake” is all Maggie’s, but does show off the synthesis of everyone’s talent: deep, complex rhythms from Nikkie, intricate bass passages from Hanna, and Maggie’s best guitar work on the album. A set of divergent, woeful vocals shared by Maggie and Hannah, with different lyrics working in contrapuntal harmony is amazing. But it’s really Maggie’s guitar that shines, giving off such a grit-strewn, melody-filled scream of regret. When they all come together around three quarters of the way through the song to jam out on a few seconds of pure instrumental, you want it to continue for another half hour.

Unless you find some forgotten Picasso painting at a yard sale and manage to net a few million at the Sotheby’s auction, buying the Telenovela Star EP will be the best seven bucks you’ve spent this year. Within the next few months they’ll be releasing a full-length album and I can’t say enough to support this band. You’ll find something familiar in everything they do, but the women of Telenovela Star have a realized voice of their own and they’re still growing. 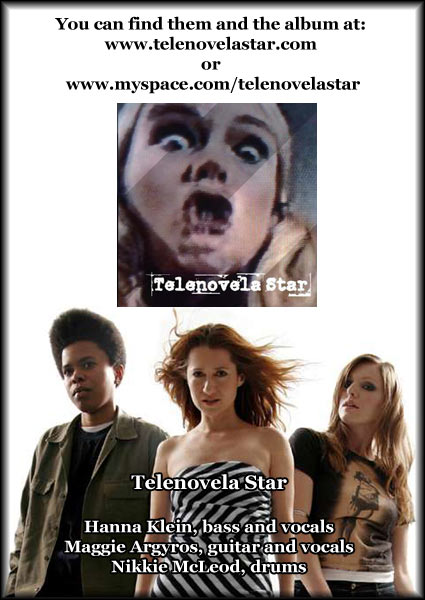 1 thought on “What’s a Telenovela?”