It’s the Anwer Man from Tenochtitlan 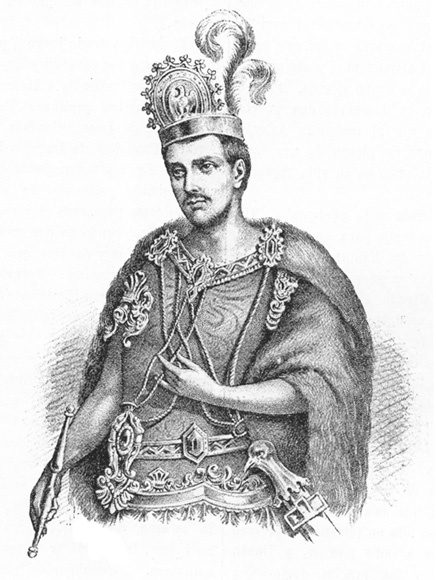 Montezuma is an F-22 Raptor currently stationed at Wright-Patterson AFB.

Dear Montezuma,
My cat knocked over our “Nuts to You Hitler” commemorative Rebo and Zootie plates.
The plates fell from the wall in the living room and onto my husband, who let out a surprisingly cattish yowl. This yowl scared the neighbours who called the police. When they arrived, they attempted to enter the wrong house and were fired upon by the tax protesters down the street, wounding one officer in the leg. This officer was to be the fifth generation of his family running in the Sligo Creek marathon at age 27, the very next week. In his anger, he beat his wife and shot himself using a Luger his grandfather collected in World War II. Incidentally, that grandfather ran the marathon with a gunshot wound to the chest and sold us our cat. Who came up with the idea of the proof of purchase you can send in to get “free” stuff idea?
Mary Herschel
Larry, Armpit, UK

Ms. Herschel, I think that the “Moon Madness” and “The Third Man Never Rings at the Cuckoo’s Nest” Rebo & Zootie commemorative coffee decanter and barbecue lighting apparatus are certainly my favourite collectible Rebo & Zootie memorabilia. I also enjoy
the rare and fun Rebo & Zootie india ink orange fruit stamp. It is positively lovely to have Zootie’s whiskered visage look upon me from the safety of my lunch time orange rind.

Dear Montezuma,
There are always leftovers. No matter how much food I buy, nor how much I prepare, the damn stuff always has a bit left over. What gives! I just want the right amount of food!
Sami Westwood
London, UK

I find it mildly distressing that your name differs little comparatively from that of Clint Eastwood, a super-star of American cinema in both an acting and directorial capacity. Your surname, Westwood, is merely the opposite of Mr. Eastwood’s, implying that your family comes from dark and depressing roots. People who only look to the sunset. Mr. Eastwood faces a bright future and is ready for the coming days. Your given name, Sami, is only one letter shorter than Clint. Whereas Clint starts with a voiceless velar plosive, a strong sound, Sami begins with a voiceless coronal sibilant. Yuck!

Monto!
My friend is a lot of fun to be around most of the time. He’s interesting, engaging, good to talk to. That is, of course, until he starts drinking. It only takes a few, but once they’re in him he gets weird. He’ll insist none of us is having a good time, it’s making him unhappy, we should go other places, even when that’s clearly untrue. I love hanging out with him, but only for the couple of hours before it gets like this. None of us seems to be able to say anything about it. Why does Pabst Blue Ribbon have a light aftertaste of peaches?
Marina Ferrer
West Hollywood, CA

MF, alcohol contains a taste molecule called a peachome. With a greater concentration of peachomes comes a greater taste of peaches. For instance, peach schnapps has a peachome concentration rating on the Kurasawa-McClatchy Scale of 4000. Stolichnaya Vodka, the mother of vodkas from the motherland of vodkas, has a KM rating of only 3. Pabst Blue Ribbon rates a 50 on the KM scale. Now, obviously that rating is low, so you would wonder why there’s such a strong taste. I am glad you asked! You see, Pabst’s in-house chemists have worked hard to contain the beverage’s peachome content within a carbon bucky-ball reorganizing of the beer’s carbon content. It’s fairly ingenious. You should see the syringe they use!

Dear Montezuma,
Do you have any tips for me to start my penny collection? I don’t have any pennies yet.
Billy, Age 47
Montauk, NY

I would begin by collecting pennies. Perhaps in a jar. Definitely not in cattle.

Dear Montezuma,
Recently, I was reading a collection of C.S. Lewis’s essays concerning the concept of a Moral Law; the idea that humans everywhere, even if they disagree about specifics, still agree that there are such things as right and wrong. Does this argument of the Moral Law constitute proof for the existance of God?
Florence Henderson
Hollywood, CA

Flo, while written about by C.S. Lewis and others, it should be noted that the Moral Law was never passed by Congress nor signed by the President. Thus it is still only, at this point, just the Moral Bill and not yet an actual Moral Law.

Al, I am not helping you win the video trivia game at the bar. That’s not my mandate.

Dear Montezuma,
How long does it take for people to get infected with the French disease?
Blemish Plucky
Sordid, Canada

Ish, ennui can take effect in as little as five minutes. A heightened metabolism combined with an increase in cigarette and wine consumption will follow close behind with an oxymoronic arrogant malaise. Productivity will decrease, with the average ability to work barely topping 30 hours a week. Less during the summer months. The desire to work for something will vanish within two hours followed by an increased sense of entitlement. Also, if you happen to own any nuclear powered aircraft carriers, they will become leaky from poor maintenance and the funding will not be available to operate them.

Pickle ranching in the home can sometimes be difficult. There are the space considerations, of course, but also feeding and care. I like to use an old closet to house my herd. First, construct a hexagonal lattice arrangement of cubbyholes in your closet. Fill with synthetic sushi garnish to make the pickles feel at home. Once you’ve brought them home from the grocery store, transfer the pickles from the jar to the cubby holes using a spoon. Never use a fork or tongs. These damage the pickles. Once ensconced in their cubbies, make sure to spray the pickles from a mister filled with a 70%/30% saline solution every three hours. Keep the door closed. Pickles hate light. Make sure to exercise your pickles at least two times a week using a standard pickle maze. They love to solve these puzzles.